The Biobank Law requires that clinical samples collected for biobank research in the future and samples already existing be stored in a biobank, if collected with the type of consent described in the law. Several public biobanks have been established in Finland: by health care districts and catchment areas, universities, and the Finnish Institute for Health and Welfare (THL). Fimea keeps a separate registry of Finnish biobanks. 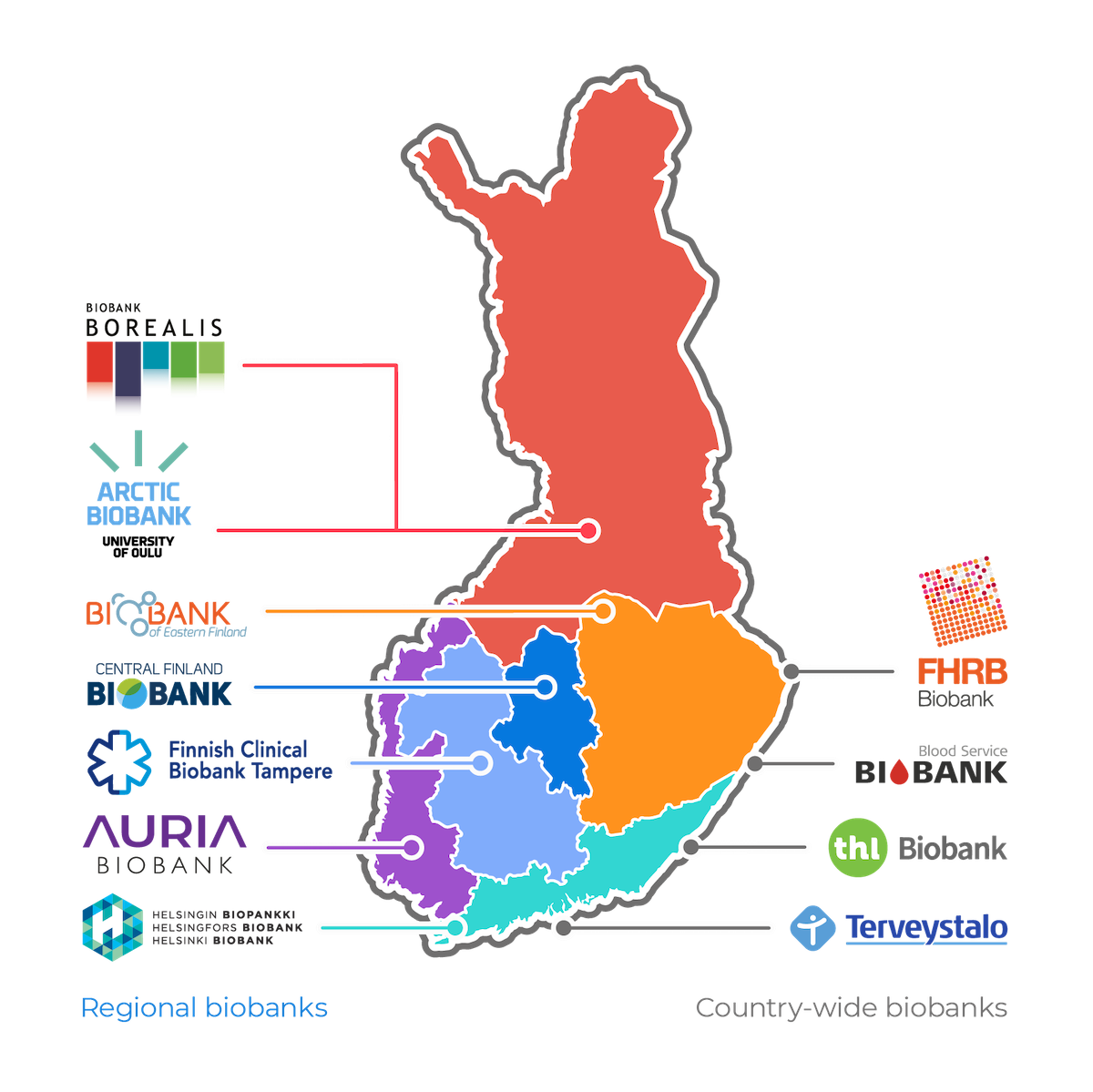 Auria Biobank is the first clinical biobank established in Finland. It obtained a licence to operate from the National Supervisory Authority for Welfare and Health, Valvira (currently Finnish Medicine Agency, Fimea) on March 10, 2014. Auria Biobank has been established by the University of Turku and the hospital districts of Southwest Finland, Satakunta and Vaasa. Approximately 80% of the samples in Auria Biobank are cancer samples. In accordance with the specialities of the hospital districts of Southwest Finland and Satakunta, the biobank supports research in cancer, diabetes and cardiovascular diseases in particular.

Arctic Biobank – University of Oulu was established in 2020 to host large population-based sample collections from Northern Finland. Arctic Biobank aims to promote research in health and well-being, and in medicine and life sciences. It provides samples and data for high-quality research projects aimed at elucidating the causes of disease and the impact of genetics, environment and lifestyles on their onset. The results of the research will help prevent disease and develop safer, more effective and individualized treatments.

Helsinki University Central Hospital (HUCS) -area of special responsibility and the University of Helsinki have established a clinical biobank that supports the translational research done in the region, and network with national and international biobanks. The research field of Helsinki Biobank is the research done in health and medical science in HUCS area. Helsinki Biobank operates to support research which aims at promoting population health, understanding the factors in disease mechanisms or the development of health care products. The biobank obtained a licence to operate from the National Supervisory Authority for Welfare and Health, Valvira (currently Finnish Medicine Agency, Fimea) on April 21, 2015.

The Central Finland Hospital District and the University of Jyväskylä established a biobank in Jyväskylä that aims to promote research and to support the development of diagnostics and treatment. The Central Finland Biobank was registered to Valvira (currently Fimea) national biobank register on October 29, 2015.

The population of Northern Finland is uniquely homogeneous, which makes the sample collections of the Northern Finland Biobank especially valuable for research. Northern Ostrobothnia Hospital District (PPSHP), the University of Oulu (UO), Nordlab and the hospital/healthcare districts of Lapland, Länsi-Pohja, Central Ostrobothnia and Kainuu have agreed to establish a biobank in Northern Finland. The biobank operations started on July 10, 2015.

FCBT’s role is to support disease prevention, studies on the effectiveness or side effects of treatment of patients, and studies exploiting pathological findings. The main focus of the biobank, in accordance with the research strategy defined by the University of Tampere and Pirkanmaa Hospital District, is research in cardiovascular disease, cancer, immunology and type 1 diabetes.

THL Biobank belongs to the Finnish Institute for Health and Welfare. THL Biobank’s registered areas of research include population’s health promotion, identification of factors involved in disease mechanisms, and disease prevention. THL Biobank is a country-wide biobank and hosts a remarkable collection of population and disease-specific samples for research purposes. Valvira (currently Fimea) granted THL Biobank a license to operate on March 10, 2014.

The research area of Blood Service Biobank is health promotion and prevention of diseases and is specialized in transfusion medicine. The biobank collects samples from blood donors during their blood donation. The Blood Service Biobank was registered in the national biobank registry Valvira (currently Fimea) on May 30, 2017.

Biobank in a nutshell

Biobank is a collection of biological samples and data gathered with the donor’s consent for future medical research and product development for healthcare and health promotion purposes.

Your consent could be crucial for the development of new medicines and treatments. Your sample could change the world!